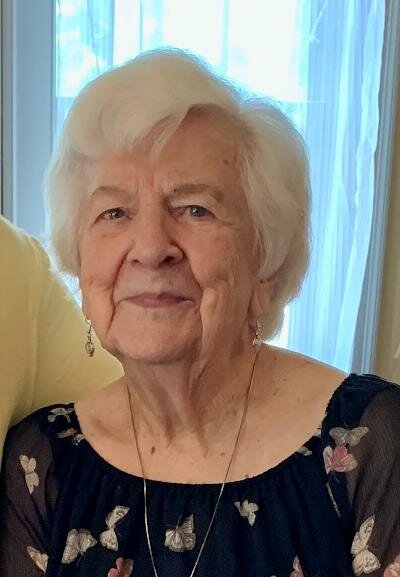 Please share a memory of Althea to include in a keepsake book for family and friends.
View Tribute Book

Althea H. (Weindorf) Grover, 93, of Southbury, CT passed away suddenly on April 19, 2022. She was born in Danbury, CT, the daughter of Leonard and Estella Weindorf. She was married to Alan B. Grover until his passing in April 2015. They were married for "66 years, 5 months, 19 days and 22 hours". She is survived by her two daughters, Deborah Grover and her husband Thomas Schade, and Brenda Grover; sister-in-law Jean Straiton; brother-in-law James and his wife Judy Grover and several nieces and nephews. She is predeceased by her parents, sister Dorothy Ward, niece Catherine Hallabeck and nephew Steven Straiton.

She was very proud of the start of her education at the one room schoolhouse in Miry Brook. She was a graduate of Danbury High School.

After the birth of her children, she was a full time mother, serving as a Girl Scout leader in New Fairfield and coordinating dance lessons and recitals for her daughters for many years. Once her girls were older, Althea held clerical positions at Shepard’s Warehouse in Bethel and Ethan Allen headquarters in Danbury. She also worked at Suburban Supply, Co. in Waterbury with her husband, who owned the business. She was an active member of Immanuel Lutheran Church, Danbury and of Good Shepherd Lutheran Church, New Fairfield.

Althea was a lifelong resident of the Danbury/New Fairfield area until she and Alan moved to Cherry Valley, New York to live the country life. In her new community she was an active member of Zion St. John's Lutheran Church, Seward, NY and volunteered at the Cherry Valley Museum. Upon Alan’s passing she moved to Southbury and became a member of Christ the King Lutheran Church in Newtown. Her strong faith in God sustained her.

She was a loving wife and mother, devoted sister, loyal friend, giving aunt, and talented crafter. Althea was never shy to share her opinion and blessedly remained physically and mentally healthy her entire life.

Memorial funeral service will be held on Friday, April 22 at 11:00, preceded by an hour of visitation at Cornell Memorial Home, 247 White Street, Danbury. Burial will be private. In lieu of flowers, contributions may be made in her memory to a charity of one’s choice.

Share Your Memory of
Althea
Upload Your Memory View All Memories
Be the first to upload a memory!
Share A Memory
Plant a Tree