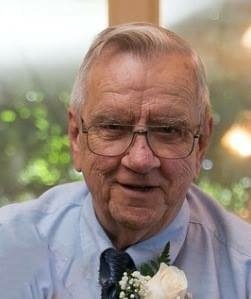 William F. "Bill" Gleissner, 86, of Brookfield, passed away peacefully in his home on January 2, 2019. He was the devoted husband of 56 years to Annellen (Otto) Gleissner. William was born on September 7, 1932 in Danbury to the late Silvan and Christine (McStay) Gleissner.

Bill graduated from Henry Abbott Tech. He retired from Southern New England Telephone in 1987, and was a life member of the Brookfield Volunteer Fire Department Candlewood Company.

He proudly served his country as a Sergeant in the U.S. Army during the Korean War.

Bill loved boating on Candlewood Lake and was a member of the Danbury Mad Hatters Barbershop Chorus, the St. Joseph Men’s Club, a volunteer driver for the American Cancer Society, and played cards at the Brookfield Senior Center.

In addition to his wife, Annellen, he is survived by his children, Heidi Gleissner (Kathy Kennedy), Brian Gleissner (JoAnne Bednarz), and Ursula Parry (Tim).  He will be dearly missed by his grandson, William Parry.  He is also survived by two sisters: Marita Schulz (Richard), and Christine MacMillan (Don); as well as several nieces and nephews.

A Mass of Christian Burial will be celebrated on Monday, January 7th at 10:30am at St. Joseph Church, Brookfield.  Interment in St. Peter Mausoleum will follow with full military honors.

The family will receive friends at the Cornell Memorial Home, 247 White Street, Danbury, on Sunday between the hours of 1:00 – 4:00pm.

Memorial Contributions in his memory may be made to Regional Hospice and Palliative Care, 30 Milestone Road, Danbury CT 06810, or to Brookfield Volunteer Fire Dept, Candlewood Company, PO Box 296, Brookfield, CT 06804.

Share Your Memory of
William
Upload Your Memory View All Memories
Be the first to upload a memory!
Share A Memory
Send Flowers