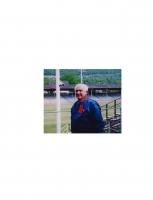 Alexander J. Ferretti January 31, 1924 - July 28, 1924 Alexander J. Ferretti Alexander J. Ferretti, 87, of Cleveland Heights, OH, loving husband of the late Margaret Elaine died Thursday, July 28th at Gladview Nursing Home, Old Saybrook. Alex was born on January 1, 1924 in New Columbus, PA. Alex grew up in Lansford, PA. He attended Lansford High School and was selected first team all state football. He was inducted into the Carbon County PA Sports Hall of Fame. Alex graduated in 1943. He fought honorably for our country in World War II when he joined the U.S. Navy. First in the European theater on the destroyer U.S.S. Meredith in which he received the Purple Heart when the Meredith was lost off the coast of Normandy. After recovering from his wounds he was sent to the Pacific Theater on the U.S.S. Texas. He received two battle stars for Iwo-Jima and Okinawa. After the war Alex attended Boston College with a BA in English. He played football there and also coached. In 1963, Alex was an English teacher at Immaculate High School and their first varsity baseball coach. He will be dearly missed by his sons, Gerald Anthony of Cleveland Heights, OH and David Joseph of New Milford and his six grandchildren. Alex is predeceased by his wife Margaret Elaine and his daughter Mary Theresa. Funeral Information Funeral services will private and at the direction of the family.

Share Your Memory of
Alexander
Upload Your Memory View All Memories
Be the first to upload a memory!
Share A Memory
Plant a Tree