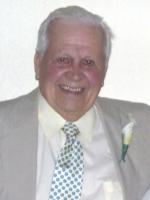 Donald M. Ziegler November 26, 1927 - June 08, 2013 Donald M. Ziegler Donald Ziegler, 85, of Brookfield, loving husband of Betty (Knapp) Ziegler, died peacefully at his home on Saturday, June 8th. He was a lifelong resident of Brookfield, born on November 26, 1927, son of the late Arthur and Mary Ziegler. Don attended Henry Abbot Technical School. He was a family man who loved his three daughters and six grandchildren with one great granddaughter and his dog Ziggy. Don was a building contractor for 50 years, building many homes and commercial buildings in and around the area towns. He belonged to the Danbury Fish and Game Club and for many years was a member of the Brookfield Sportsman's Club. Joining the Army in 1950, he served in the First Calvary during the Korean War and was a member of the VFW. In addition to his wife of 60 years, Betty, Don will be missed by his daughters, Kathy Brown, Cheryl Walla and her husband George and Deborah DiDonato and her husband Brad; 6 grandchildren, Jason and Dustin Brown, George III and Jennifer Walla, Kyle and Tyler DiDonato as well as his great granddaughter, Kyleigh Lawrence. Funeral Information A Memorial Mass will be celebrated at St. Joseph Church of Brookfield at 10 AM on Friday, June 14th. Burial will be at the convenience of the family. There will be no calling hours. Donations Information Memorial contributions in his memory may be made to Regional Hospice and Home Care, 39 Ridgebury Rd., Danbury, CT 06810 or charity of one's choice.
Friday
14
June

Share Your Memory of
Donald
Upload Your Memory View All Memories
Be the first to upload a memory!
Share A Memory
Send Flowers
Plant a Tree