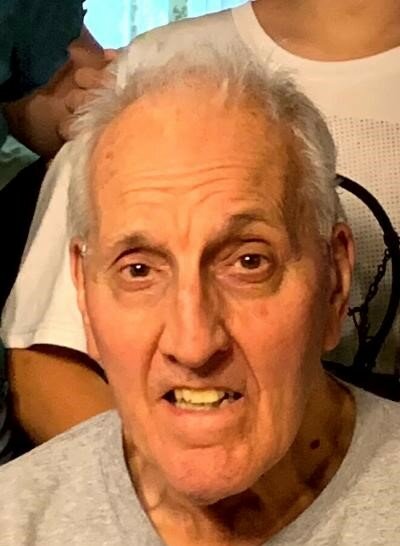 Please share a memory of Santi to include in a keepsake book for family and friends.
View Tribute Book

Santi was born on January 21, 1943 in White Plains, New York to the late Anthony and Rose Girolamo. He graduated from White Plains high school in White Plains New York. He married his beloved wife Annette in April of 1965 and shared 53 blissful years of marriage. He proudly served his country from 1966-1968 in the United States Army during the Vietnam War as an Artillery Specialist.  He worked as a Union Carpenter and was part of the heavy construction team in  building  The Galleria Mall in White Plains. He worked on numerous other large construction in New York until retirement. Santi loved wood working and was very meticulous in his craft.

Santi was a very compassionate and caring man, especially when it came to animals and took in many strays over the years.  He loved his children and family  and was happiest as his role of Baba to his grandchildren, whom he loved tremendously and cherished every moment with them.

Santi will be sadly missed by his children: Robert Girolamo of Danbury, and Gina Romano and her husband Pasquale of Bethel; grandchildren: Mia, Briana, and Joseph; brother and sister-in-law Dominick and Fran Destito of California; and 11 nieces and nephews.  In addition to his wife and parents, Santi was predeceased by his sister, Roseanne Sikora.

A Mass of Christian Burial will be celebrated at 10:00am on Friday, February 18, 2022 at St. Mary Parish in Bethel.  Family and friends may pay their respects from 8:00am – 9:00am prior to Mass at Cornell Memorial Home, Danbury.

In lieu of flowers a donation in his name came be made to the Alzheimer’s Association, 225 N. Michigan Ave., Chicago, IL 60601. Or at their website alz.org

To place an online condolence or light a candle in Santi’s honor, please visit www.Cornell Memorial.com

Share Your Memory of
Santi
Upload Your Memory View All Memories
Be the first to upload a memory!
Share A Memory
Send Flowers
Plant a Tree