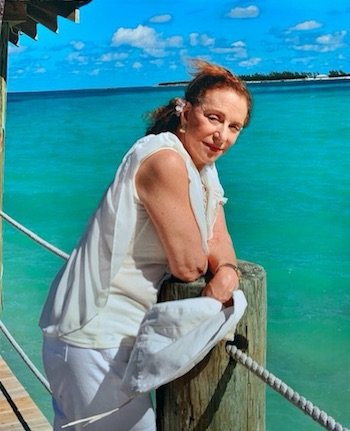 Danbury – Mrs. Stella Marie (Panzarino) Eidt, age 77, of Danbury, passed away peacefully in her home on Saturday April 24, 2021. She was the loving wife of the late John C. Eidt, Jr.

Stella was born on July 17, 1943 in Brooklyn, New York, daughter of the late Frank and Frances (Hagen) Panzarino. She graduated from St. Rose of Lima Parochial School and from St. Brendan’s High School with a Regents Diploma in Brooklyn, New York. She raised her family in Brooklyn and spent her summers on Candlewood Lake. She worked at the Bank of New York for 35 years. She was a faithful and active parishioner of St. Gregory the Great Church in Danbury, CT. She was a dedicated and active member of the Women’s Club of Danbury and New Fairfield for over 25 years and served as Past President, continuing to serve on the board in many capacities. She was a member of the Garden Club of Danbury, the Danbury Republican Town Committee, and the Danbury Friends of the Library.

Stella was never short of something to say; she was a take charge woman who enjoyed living on Candlewood Lake for 35 years. On Sundays she would be found at noon mass at Saint Gregory’s with her daughter and grandson. She enjoyed watching 60 Minutes and Judge Judy. Stella had a passion for decorating and seasonal floral arrangements. She was deeply devoted to her family, especially her grandchildren whose lives she was actively involved in. She cherished spending time with them boating, eating out and playing Jeopardy after Sunday family dinners.

Stella was predeceased by her identical twin sister: Maryanne Graupe, her brother: Joseph Panzarino, her sister in law: Tatiana Panzarino and her brother in law: Robert Eidt.

Stella’s family will receive relatives and friends with a walk-through visitation at the Cornell Memorial Home at 247 White Street, Danbury on Thursday April 29,2021 from 2 to 4 and 6 to 8 p.m.  All attending are asked to please wear a mask and practice proper social distancing.  A Mass of Christian Burial will be celebrated on Friday April 30,2021 at 11 a.m. at St. Gregory the Great Church in Danbury. Burial will be in St. Peter’s Cemetery in Danbury.

Memorial contributions may be made to Kevin’s Fund

Share Your Memory of
Stella
Upload Your Memory View All Memories
Be the first to upload a memory!
Share A Memory
Send Flowers
Plant a Tree