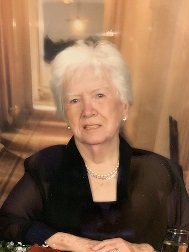 Bernadette Therese (Powell) Bono, beloved mother, grandmother and resident of Brookfield,  died on October 1, 2019 at the age of 92.  Born November 8, 1926, Bernadette was the tenth and last surviving child of Catherine Manley Powell and John Joseph Powell.

Bernadette liked to say she was born “in the shadow of the Empire State Building” and had fond memories of her childhood on New York’s lower East Side. She graduated from Cathedral High School, the patron school of St. Patrick’s Cathedral in 1945. She was married to David T. Bono for 50 years, prior to his passing in 2004. Bernadette and Dave spent the first year of their marriage “on the road”, traveling across the southern United States. In 1959, they discovered Candlewood Lake in Connecticut, and decided to build a vacation home on a hill overlooking the lake, moving there as year-round residents in 1966.

Bernadette was President of the Danbury Salvation Army Women’s Auxiliary, Vice-President of The Newbury Homemakers, served as a 4-H Leader, taught Catechism and was active in the Candlewood Shores community. She was a member of St. Joseph’s Church and later St. Marguerite’s Bourgeoys in Brookfield.

Bernadette was creative and could find beauty in nature at every turn.  She enjoyed painting, pastels and sketching. She loved flowers and plants, and was always in the middle of weaving a dried flower wreath. She was a prolific reader and always had a stack of books at her side.

The seventh of seven sisters, Bernadette was known affectionately as “Cissy”. Her happiest times were spent with family, talking over a cup of tea, sharing stories and laughs. Bernadette was the ultimate cheerleader for anyone she met – she was adept at identifying a person’s best qualities and giving them pep talks of encouragement.

Bernadette is survived by her daughter Maureen Schenfeld and son-in-law Paul of Easton, CT, son David L. Bono and daughter-in-law Lisa of Bethel, CT and her son and devoted caregiver, John J. Bono of Brookfield, CT.  She is also survived by her beloved grandchildren, Catherine and Patricia Schenfeld of Easton, CT and David and Victoria Bono of Bethel, CT, as well as over 25 nieces and nephews.

The family will receive friends on Friday October 4, 2019 afternoon from 2 to 4 p.m. and in the evening from 7 to 9 p.m. at Brookfield Funeral Home, 786 Federal Road, Brookfield, CT. A mass of Christian Burial will be celebrated on Saturday October 5, 2019 at 11:00 a.m. at St. Mary’s Church, 26 Dodgingtown Road, in Bethel, CT.  Luncheon at a local restaurant to follow. Donations in her memory may be made to Metavivor, to benefit metastatic breast cancer research.

Share Your Memory of
Bernadette
Upload Your Memory View All Memories
Be the first to upload a memory!
Share A Memory
Send Flowers