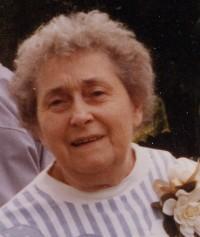 Mary Elizabeth (Fairchild) Sauer January 28, 1923 - December 06, 2003 Mary Elizabeth "Betty" (Fairchild) Sauer, of Glenville Road, New Fairfield, devoted wife of Donald W. Sauer, Sr., died on Saturday, December 6th at Danbury Hospital, at the age of 80. She was born in Danbury on January 28, 1923, daughter of the late Ivan and Mary (Hawley) Fairchild. She was a graduate of Danbury High School, Class of 1940. Mrs. Sauer was a homemaker, maintaining the family home for her husband and four children. She was a Charter Member of the Lutheran Church of the Good Shepherd, Missouri Synod, in New Fairfield and dedicated much of her time to the Woman's Service League and Altar Guild of Good Shepard. She enjoyed bowling with the church women's league and knitted blankets for the Southbury Lutheran Home. She was a past member of the Germantown Auxiliary. Besides her loving husband of 61 years, Donald, she will be sadly missed by her sons, Donald W. Sauer, Jr. and his wife, Joyce, of Hopewell Junction, NY, Jack W. Sauer and his wife, Marie, of Danbury; daughters, Donna Gray and her husband Eugene of Jacksonville, Fl., Joan Schneider and her husband, Frank of Danbury; five grandchildren; and one great grandchild. She is also survived by sisters, Barbara Mietelski and Nancy Jones, both of Danbury; as well as several nieces and nephews. She was predeceased by a brother, Hawley Fairchild, and sisters, Dorothy Lindsley and Gene Evanuska. Funeral Information Funeral Services will be held at Lutheran Church of the Good Shepherd on Wednesday, December 10th at 1:00pm. Burial will follow in Immanuel Lutheran Cemetery, Danbury. Friends may call on Tuesday, December 9th at the Cornell Memorial Home, 247 White Street, Danbury, between the hours of 5 and 8pm. Donations Information Memorial Contributions in the memory of Mrs. Sauer may be made to the Lutheran Church of the Good Shepherd, 2 Colonial Road, New Fairfield, CT. 06811, or to the American Lung Association, 45 Ash Street, East Hartford, CT. 06108-3272.

Share Your Memory of
Mary
Upload Your Memory View All Memories
Be the first to upload a memory!
Share A Memory
Plant a Tree