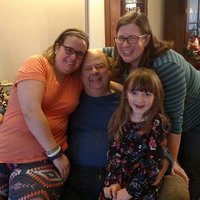 Jack Bouclier of Danbury, 70, passed away peacefully on Tuesday, November 26 at Danbury Hospital, surrounded by his loving family. He is survived by his wife, Rose Marie (Porchia), his two daughters, Nicole and Laurance (Lauri for short), grandchildren, Sophia and Violet, and four siblings Christiane, George, Betty and Robert. He also has numerous nieces and nephews spread across the country.

Jack was born in New Rochelle, NY on December 20, 1948 to Robert and Blanche (Trevy) Bouclier.  He and his family later moved to Newtown, CT, where he attended Newtown High School on the Hawley Campus.  He received his B.S. and M.S. in teaching from Western Connecticut State University and his Sixth Year Certificate in teaching administration from Southern Connecticut State University. He met his future wife at Pathmark, where they spent a few years flirting and dating before tying the knot. Jack memorably was so excited to propose to Ro, that he popped the question in the car driving her home.

He married his beloved wife, Rose Marie, on August 28, 1971 and they started their life in Danbury, first living in a little house on Willow Street and then moving into their current home on Kevin Dr.  Besides raising two rambunctious girls, they’ve had countless pets surrounding them, including the friendly neighborhood peacock.  The family also started their annual tradition of vacationing down in Chincoteague, VA, spending hours at the beach and watching the wild ponies roam.

Jack was one of the best and most beloved teachers in the state.  He started his career in the  Ridgefield Public School System before settling into a long tenure at New Milford High.  Known to all as Mr. Bouc, he dedicated his life to helping raise New Milford’s kids. He was a Science teacher as well as the Dean of Students. Always honest and good for a listen or a laugh, he connected with everyone who walked in the doors. He spent years coaching the girls’ varsity basketball team.  He was a class advisor for many classes. He ran the yearbook department, which produced some of the best-looking yearbooks at the time.  He started the Students Against Drunk Driving (S.A.D.D.) chapter at the high school. He started the Leadership Training program at the school, helping inspire students for 10 years to be their best.  He also spent years playing practical jokes on students whenever he could.  One memorable one was super gluing change to the caf floor to see how many students would stop and try to pick it up.

Jack retired in 2006 He got the chance to play many rounds of bridge with his long-time friends, Dave Hoyt, Bill Hibbard and Chuck Roberson.  He continued to also try and whip is daughter’s butt in cribbage, but he raised a fierce competitor who challenged him to the end. He spent countless Saturday mornings with the St. Greg’s Breakfast Group, laughing and arguing about family, politics, Yankees and the Pats.  He also spent hours calling all his brothers and sisters, while then deciding to only spend five minutes on the phone with each.  He simply loved connecting with people every day, even if it was for a moment.

An obituary can’t possibly capture everything that happened in his life but know that Jack’s was a life well lived. He will be sorely missed by all who crossed his path.  If you have a moment, send a little love and light to his surviving family and directly to him.