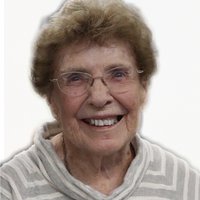 Barbara Urkiel Ward, 94, of Brookfield, died at Danbury Hospital on Wednesday, February 13th.  She was born in Brooklyn, NY on August 13, 1924, daughter of the late John and Ruth (Smith) Henry.

Barbara married Joseph B. Urkiel on April 4, 1948, making their home in Brookfield where they raised their two daughters.  She was a longtime parishioner of St. Joseph Church and was an active member of the  Confraternity of the Most Holy Rosary.

She worked at Fairfield Hills, Western CT state university and the Burroughs Corp, in administrative positions.   Barbara retired to Cape Coral, FL in 1989 and was actively involved in the Cape Coral Golf Course Women’s League.  She also enjoyed being a member of the Connecticut Club of Cape Coral, and volunteered at Cape Coral Hospital.

Barbara enjoyed traveling, especially to visit with her five sisters in New York.  She remarried, and was predeceased by her second husband, Robert A. Ward.

Her family realize that the last 2 and 1/2 years were a gift and will always be cherished.  She will be sadly missed by her two daughters, Beverly Urkiel and her companion, Roger Peet, and Marianne Mitchell and her husband, Scott; her grandchildren, Shannon Nicholas and her husband, Steve, David DiBella, Megan, Jillian and Drew Mitchell; and her great grandson, Jacob Nicholas.  She is also survived by her sisters, Catherine Madlinger, Dolores Panarese and Josephine Lichtenberger; as well as many nieces and nephews.

She was predeceased by her sisters, Ruth Merker, and Rosemarie Kirchman; her brother, George Henry; and her first husband, Joseph B. Urkiel

A Mass of Christian Burial will be celebrated on Monday, February 18th at 11am at St. Joseph Church, Brookfield.  Burial will take place privately in St. Peter Cemetery.

The family will receive friends at the Brookfield Funeral Home, 786 Federal Road, Brookfield, on Sunday between the hours of 2-4pm.

Memorial Contributions in her memory may be made to the charity of your choice.